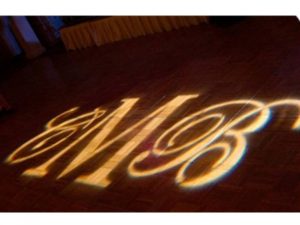 What is a gobo? A funny sounding word? A clown? A light? A monogram? Yes, to some of those things, but no to the rest. We often get asked questions when we bring up the idea of gobo projections. Allow us to break it down for you:

A gobo is a lighting design tool that allows you to project different images, text, or patterns on a surface. Like anything else, it can come at a basic level or more sophisticated.

At its most basic level, a gobo is a steel metal plate with a di-cut design. This metal plate is then inserted into a type of lighting fixture called a source four leko and when the light is turned on it acts like a shadow projection that you can cast on a wall, ceiling, floor, etc. Think like your old school shadow puppets. The light standard is just a bright white; however, color can be added by using a gel film (like a transparency) that is put at the front of the light lens and the light shines through it.

Gobos can also be projected using other types of lights besides just leko fixtures. They can be used in moving fixtures that can add movement, whereas a standard leko is just a stationary projection. The type of moving head lights that we carry are typically our MAC250 fixtures. Those require a different size gobo plate, but the principle is the same in that they are inserted into the light fixture and then are projected. These particular type of lights can also adjust the color, position, or duplicate the image so that it projects a triple image display.

Gobos can be purchased in standard stock images or custom designed to be a personal name, logo, monogram, or graphic. There are other types of gobos that exist as well besides just the steel plates. Glass gobos, though much more expensive, can project a full color image and are much more high definition quality. Similarly, an Image Pro slide is a related concept, but is designed more for a one time use. These gobos are made out of a plastic film that the image is printed on and then placed in a plastic casing. These can also project in full color and are much more cost-effective than the glass gobos. The only difference here is that they do require a separate projection fan element that is attached to the leko fixture. Since these slides are made from plastic, they are susceptible to heat, so the best bet is to turn them on only during the 4-6 hours of actual use at your event. 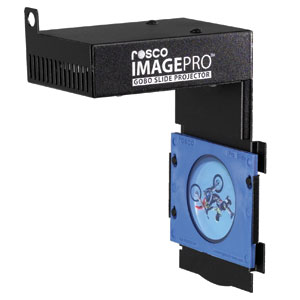 One of the biggest factors when placing a gobo projection is distance and size that you want the image. Think like an old school projector for a minute. The closer the projector is to the screen, the smaller the image. Likewise, the further away it is the larger the image, but it may require you to focus it. Our leko fixtures that we use for the vast majority of our gobos are all adjustable zoom. This allows us to have some flexibility on the zoom lens to provide a clear image. Sometimes though even that is not enough and a special degree lens is needed to ensure that the projection image is clear.

So the next time you hear or read the word “gobo” you will hopefully have a bit of a better understanding. Gobos can be one of the greatest atmospheric enhancers for any event. But let’s face it…..it is still a pretty silly sounding word.

← We Heart Terrariums.
Put on your Dancing Shoes! →
Magic Moments Parties and Events